Palm oil (also known as dendê oil, from Portuguese) is an edible vegetable oil derived from the mesocarp (reddish pulp) of the fruit of the oil palms, primarily the African oil palm Elaeis guineensis, and to a lesser extent from the American oil palm Elaeis oleifera and the maripa palm Attalea maripa. 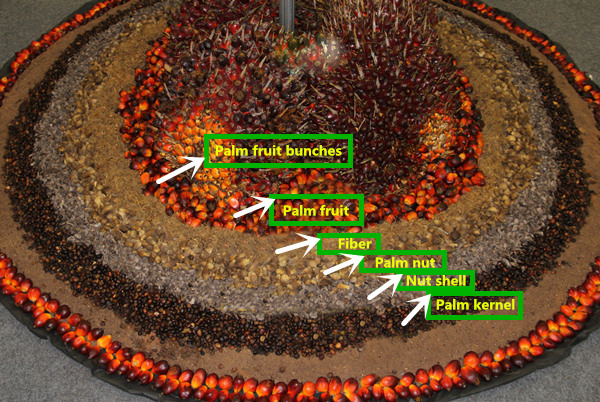 Oil palm is a monoecious crop as it bears both male and female flowers on the same tree. Each tree produces compact bunches weighing between 10 and 25 kilograms with 1000 to 3000 fruitlets per bunch. Each fruitlet is almost spherical or elongated in shape. Generally, the fruitlet is dark purple, almost black and the colour turns to orange red when ripe. Each fruitlet consists of a hard kernel (seed) enclosed in a shell (endocarp) which is surrounded by a fleshy mesocarp.

Regional production
Indonesia
As of 2009, Indonesia was the largest producer of palm oil, surpassing Malaysia in 2006, producing more than 20.9 million tonnes.Indonesia aspires to become the world's top producer of palm oil,and is expected to double production by the end of 2030.But at the end of 2010, 60 percent of the output was exported still in the form of Crude Palm Oil. FAO data show production increased by over 400% between 1994 and 2004, to over 8.66 million metric tonnes.
Malaysia
In 2012, Malaysia, the world's second largest producer of palm oil,produced 18.79 million tonnes of crude palm oil on roughly 5,000,000 hectares (19,000 sq mi) of land. Though Indonesia produces more palm oil, Malaysia is the world's largest exporter of palm oil having exported 18 million tonnes of palm oil products in 2011. China, Pakistan, the European Union, India and the United States are the primary importers of Malaysian palm oil products.
Application
About 70% of total palm oil consumption is used in food,and it is most widely used in frying oil all over the world. The production of chips,puffed food and instant noodles use great quantities of palm oil.About 20% of the total consumption is used in industrial use,and it is mainly used for making soap, stearic acid and glycerol.The application of biofuel consumption will increase in the future.